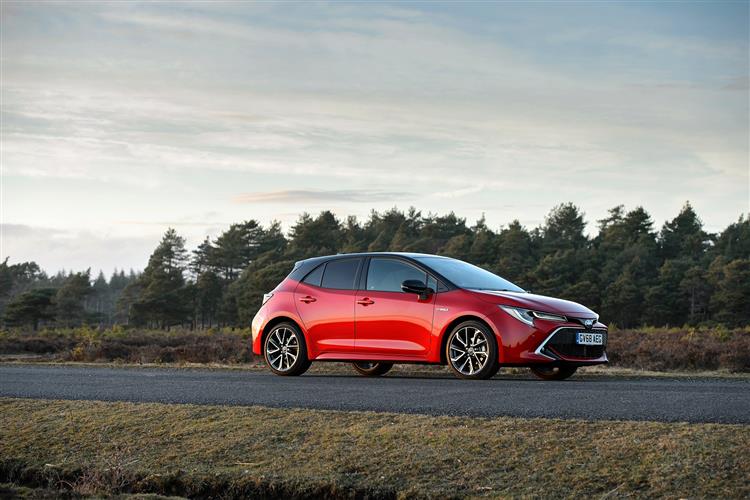 The Corolla lineage is certainly impressive. It's still the world's most successful automotive model nameplate, dating back to 1966, since when 46 million cars have been produced. Away from naming semantics, there's much of interest here, not least the fact that the primary engines offered are petrol/electric hybrids. There are two of them from the brand this time round, a 1.8 and a 2.0-litre unit, both of the 'self-charging' non-plug-in variety. This Corolla also aims to change customer perceptions of Toyota in this sector, which tend to centre around expectations of drab interior quality, forgettable looks and boring drive dynamics. This car, we're promised, is a huge step forward from its Auris predecessor in all these areas. But will all that be enough to at last make this Japanese maker competitive at the sharp end of this class amongst Focuses and Golfs? There are three body styles on offer, a saloon variant joining the five-door hatch we tested and the alternative 'Touring Sports' estate. All are built on the 'TNGA' 'Toyota New Global Architecture' platform and the hatch and estate are constructed at the brand's British factory in Burnaston, Derbyshire.

The 1.8-litre hybrid unit we tried works with a 53kW 600V electric motor to generate a combined system output of 122hp. That recipe might sound pretty similar to that of the old Auris hybrid, but the powerplant on offer here is now a much cleverer unit. There's an increased valve angle for a better fuel and air mix, plus it can switch at will between intake and direct injection to prioritise either performance or economy. Toyota says it's worked hard to better mate this package with the belt-driven CVT auto gearbox that all its hybrids have to have, pointing to the way that greater torque from the electric motor should now provide a more linear increase in revs under acceleration. And sure enough, if you've owned one of the brand's petrol/electric models before, you'll notice that this one is more driveable. But the whole point here is to garner conquest sales from customers previously used to a small diesel. These folk will still have to adapt to the way that big throttle inputs cause a flare of revs that the set-up initially struggles to translate into rapid forward movement. And they'll also still need to accept a vast reduction in mid-range pulling power; this engine's very modest 142Nm torque output is about 40% down on what you'd get from a typical 1.5 or 1.6-litre rival small diesel unit, something you'll really notice in give-and-take motoring; overtakes have to be planned much further in advance. Push on and you should find this Toyota far more dynamically able than its segment predecessors this time round. Throw the car into a corner and you'll find that though this Corolla is no Focus, it far from disgraces itself, with a decent level of front end grip and steering that's predictable and accurate, though rather light.

The Corolla nameplate may have been globally successful over half a century but it's never been applied to a really good looking family hatch - until now. As an alternative to this hatch body style, there are two further models, a 'Touring Sports' estate and a Saloon, both of which sit on version of the new GA-C platform lengthened by 60mm. All are sleeker, sharper looking and altogether more appealing than anything Toyota has previously offered in this segment. At the wheel, there are also big improvements. Material quality is impressive, with copious use of piano black and metallic-style surfacing. It's not all about the tinsel either. The cabin's ergonomically sound too, thanks to a reduction in instrument panel height that enhances your forward view and a wider centre console area that gives the cockpit more of a wraparound feel. Plus you also get comfortable seats, good forward visibility and reasonable amounts cabin storage. Further helping with the overall feeling of greater sophistication is the view you get through the much smarter three-spoke leather-stitched wheel - that of a new instrument binnacle that Toyota has chosen to present with a combination of digital and analogue design. Anything it can't tell you will probably be covered off by an 8-inch 'Toyota Touch 2' centre-dash screen that deals with the usual DAB audio, Bluetooth, navigation and online connectivity options. Though it isn't cutting-edge in terms of graphical sophistication, we appreciate the fact that it incorporates a standard rear view camera. There's reasonable rear seat space. And out back, the hatch offers a 381-litre boot.

Corolla hybrid pricing starts from around £24,000 - which gets you the hatch version we tried; Saloon and Touring Sports estate body styles are also available. The 1.8-litre Hybrid engine is the only unit in the range to be available with all trim levels - 'Icon', 'Icon Tech', 'Design' and top 'Excel'). As an alternative to the 122hp 1.8-litre unit, Toyota also offers a 180ho 2.0-litre hybrid unit, but it's only available with pricier trim levels and consequently, is priced from around £27,500. Equipment levels are pretty generous, with all models getting LED headlights, heated front seats and a reversing camera. And base 'Icon' trim also includes 16-inch alloy wheels, LED tail lamps, front fog lamps, a shark fin antenna, an alarm and dusk-sensing and manual levelling features for the headlamps. On the inside, there's dual-zone air conditioning and leather trim for the steering wheel and gear knob, plus the front seats feature powered lumbar support. Infotainment's taken care of by an eight-inch 'Toyota Touch 2' multimedia centre-dash display that lets you Bluetooth-in your smartphone and provides access to a six speaker DAB stereo system. There's also a 'Drive Mode Select' driving modes system and an 'eCall emergency assistance set-up, part of an extensive rosta of standard safety kit.

We've got to the point where a 'self-charging' (ie. a 'non-plug-in') hybrid model costs hardly any more to buy than an equivalent small diesel. But have we also got to the point where such an engine can match or beat its diesel counterpart in terms of real-world fuel economy? Let's see. The version of this Corolla that most customers will buy - the 1.8-litre Hybrid on test here - manages between 55.4 and 65.9mpg on combined cycle WLTP tests. That's quite a span, reflecting our experience that official fuel results in a hybrid are much harder to achieve than they are in a diesel. To give you some perspective, for a comparable Volkswagen Golf 1.6 TDI DSG auto, the combined cycle span is 51.4 to 54.3mpg. And for a Ford Focus 1.5 EcoBlue 120PS auto, it's 49.6 to 54.3mpg. But even if a comparable small diesel family hatch does end up being slightly more economical than an electrified 1.8-litre Corolla, it won't be able to get anywhere near this Toyota's CO2 emissions showing. That's rated at up to 76g/km for a 1.8-litre Hybrid Hatch model on 16-inch wheels. For that Golf model we mentioned, the best official figure is 104g/km, while for the Focus, it's 109g/km. And all that'll add up when it comes to your Benefit-in-Kind tax status.

So what do we have here? A name from the past which packages up technology from the future. Very soon, all family hatchback-class models will feature model line-ups that are primarily electrified. But Toyota has brought us that right now. In a car its volume brand competitors will have to take very seriously indeed. If you're going the hybrid route with a car in this sector, it makes sense to buy into the brand that has most experience in producing this kind of powertrain - and that's unquestionably Toyota. Which leaves us saluting Toyota's strongest ever proposition in the family hatchback segment. Because the market for hybrid models still isn't fully formed, the Corolla won't threaten the class leaders in terms of overall sales. But it's probably the cleverest choice you could make in the sector. And a massive step forward from its uninspired Auris predecessor. If you're looking for a car in this class, this one probably isn't currently on your shopping list. We think it ought to be.